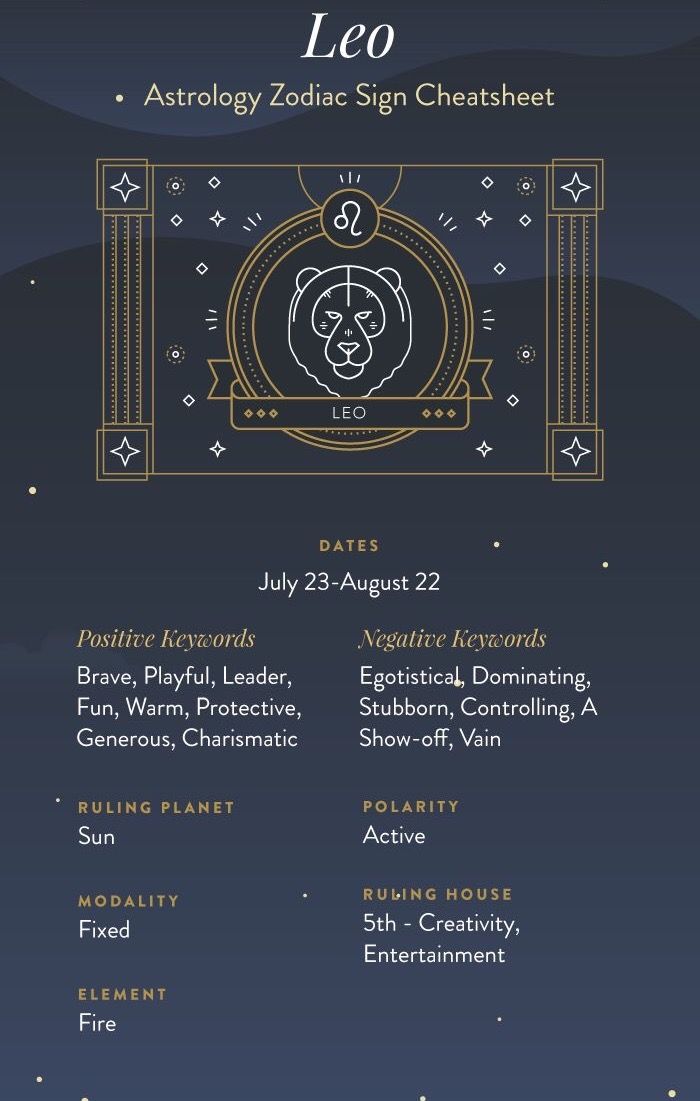 Leo is the fifth sign of the zodiac. These folks are impossible to miss since they love being center stage. Making an impression is Job #1 for Leos, and when you consider their personal magnetism, you see the job is quite easy. Leos are an ambitious lot, and their strength of purpose allows them to accomplish a great deal. The fact that this horoscope sign is also creative makes their endeavors fun for them and everyone else.

It’s quite common to see a Leo on stage or in Hollywood since these folks never shy away from the limelight. They are also supremely talented and have a flair for the dramatic. Warmth and enthusiasm seem to seep from every Leo pore, making these folks a pleasure to be around. They do love pleasure and being the center of attention!

The Leo zodiac symbol is the Lion, named for the stellar constellation this sign corresponded to by the astrologers of the old world. The astrological symbol of the Lion goes back to Greek mythology when it was associated with the Lion that Heracles overcame in a heroic mythological battle. Since then it is a symbol of victory, pride, and courage.

The constellation of Leo contains many bright stars, one of which is called Regulus, which means “the little king” and lends some of the magical and regal connotations to the Lion’s sign. In Latin, Leo means “lion”, becoming the official name for this sign in western astrology through translations of ancient astrological texts.

In the western tropical zodiac, Leo season begins on July 23, commencing the middle and height of Summer in the Northern Hemisphere. This is the time of year when the sun, Leo’s planetary ruler, is at its most potent strength, heat, and light. The Leo archetype radiates proud “solar” confidence, heart-felt courage, and is linked to the celebration of the fruits of Summer.

Leo is the second of the four fixed signs of the zodiac, who all hold an elemental energy of endurance and stability in the center phase of the four seasons. Leo begins the middle, and height of Summer, the symbolic source of this sign’s assured, well-established, and sustained confidence.

Leo’s element is fire, the lightest, brightest element, thought by ancient astrologers to be akin to the divine light of the stars and the vital, life-living rays of the sun. Leo’s affinity for leadership, performance, self-promotion, and courage are kindled in the fire element.

In classical astrology, the sun only ruled one sign, and so is the natural planetary ruler of Leo. Here, the sun has full affinity and potency in this regal, radiant archetype, being able to be as proud, performative, and vital of a planetary force as it likes to be. With the sun as the center of our solar system, it puts Lions in the center of life and in the middle of their families and communities.

The sun in Leo is found in the charts of courageous, often dramatic and artistic people, that do not mind taking leadership or being in the limelight. In more modern, psychological forms of astrology, the sun is connected to our core ego expression, giving folks with this sun sign a reputation for having a strong, well-developed sense of self.

Leo is in polarity with the fixed air sign Aquarius. Ruled by the sun, Leo likes to express, conquer, and perform, where Aquarius (classically ruled by Saturn), likes to test, judge, and set boundaries. When in the opposite sign of his preferred home, Saturn is said to be in detriment or at a sort of disadvantage in the bold sign of the Lion. Imagine the stern planetary god of time, trials, and discipline, thrust into a world of drama, pride, and passion.

Leo tends to be a sign associated with pride, vanity, and youth, where Saturn is associated with wisdom, restraint, and eldership, two very opposite phases of life. Positioned in this sign, Saturn would have to compensate, presenting in those born with Saturn in Leo as those who need to learn how to strike a balance by being discerning and disciplined when expressing themselves. It may result in them either inhibiting their more theatrical nature or in applying great discipline to their artistic or leadership abilities, becoming their own hardest critics.

In the modern astrology system of the Twelve Letter Alphabet, each zodiac sign rules one of the twelve houses in the birth chart. This innovation was created by psychological astrologers to match sign affinities to related house topics.

Leo was assigned the fifth house of children, good fortune, and creativity since its bold, childlike enthusiasm is similar to the way the fifth house indicates what themes a person will be drawn to when seeking pleasure, expression, and inspiration. Since Leo is ruled by the sun, this modern astrology system invites a radiant, solar sub-signature to the significance of the fifth house.

Leo’s archetypal traits are derived from its active, masculine, or yang qualities, making this sign oriented toward assertive engagement with the outer world. Alive in both a Leo woman or Leo man, those born with the sun-god as their rising, sun, or moon sign have radiant energy in their core personality—like the solar power in the heart of Summer.

As a fixed sign, the Lion holds the qualities of being a sustainer, making those with Leo in their charts great at dedicating themselves passionately to projects as well as taking leadership in inspiring their team. Ruled by the sun, these natives can be thought of as the “performers” of the zodiac that will courageously set themselves in the center of any dynamic.

Being natural-born leaders, the primary strengths of Leo are courage and confidence. Being born with a sunny, solar disposition, they usually find it easy to feel happy, enthusiastic, and optimistic. When embarking on their journeys and endeavors in life, those with strong, well-supported Leo chart placements rarely question themselves and can usually access a strong baseline of self-assuredness.

Leos have a great sense of pride and loyalty, and if you let them shine in your world and give them the praise and adoration that makes them feel alive, they will be a friend for life. Being so confident and optimistic themselves, they tend to see their friends and loved ones through the same lens, encouraging their abilities and self-confidence as well.

In enjoying life’s pleasures, and wealth, they tend to be very generous with others, showing love and appreciation with fine gifts and experiences. Leadership is a natural strength for this sign in the sense that they can be a figurehead or representative of an idea, a group philosophy, project, or movement. Unless their charts lend other more earthy placements, their leadership strong suit will not necessarily be administrative, but rather inspirational, keeping everyone connected to a message and purpose through their motivating presence.

Those born with strong Leo placements tend to be artistic and express their fiery nature through body movement as well as active, stimulating, and bold art forms. Leo’s connection with royalty and rulership lends a regal and magnanimous presence to the embodiment of those born under the Lion’s sign.

Some sources of weakness for Leo are rooted in their great strengths. Being a fixed fire sign, Leos can get passionately “fixed” in their opinions or principles and proudly defend these long after they even believe in them anymore. Because of their great pride, it may be difficult for them to admit when they have been wrong, or hasty.

A helpful practice to balance an overly dominant or overly self-centered Leo nature can be to engage in active listening and taking time to consider another’s point of view. The Leo hunger to be in the limelight can make them rather ruthless and self-serving, making it important for them to remember the people that supported their ascension to success along the way.

At the core of Leo-type personality imbalances is a surprising vulnerability and insecurity that others may not see because of the way they project confidence regardless of how they may be feeling. It points to a potential over-dependency on compliments, soothing, and assurance from friends and family that can be exhausting and unrealistic for all parties to sustain.

The deepest pitfalls for Leo can be their own vanity and jealousy, which are intrinsically linked. In need to have constant assurance and attention from their lovers, they can become deeply jealous and competitive with anyone who tries to share the affections of those they care about. This is an important message to teach Leo children; there is enough love in the world for everyone, and everyone needs a chance to shine.

The voice of authority, confidence, and zeal for life comes forward in the Leo mantra: I will. Leo’s sense of purpose is all about conquering obstacles, achieving victory, and rising to prominence. They are performers, moving into center stage in life to lead and inspire others.

We all have Leo somewhere in our birth chart, so we can look to the house that Leo rules to find the specific area of our life we approach in a confident, generous way, or where we need to call in this solar energy for mastery.

Natives from this sign tend to be drawn to any pursuit where they can shine by creatively expressing themselves, or can inspire others to do the same. Art, dance, fitness, movement, and any performative, dynamic activity provide Leo an outlet for their potent fiery energy.