The Modern Ego and How It Affects Human Behavior

Have you ever listened to the news and wondered why we can’t all live in peace? In The Sacred Ego (North Atlantic Books, 2015), author Jalaja Bonheim says the ego is a sacred function that deserves our gratitude and reverence. However, two separate layers of unconscious conditioning have kept humanity trapped in violence and warfare for millenia. This excerpt, from Chapter 2, “Birthing the Planetary Ego,” discusses how humans disempower themselves by rejecting the ego.

The very word ego has become a catchall for whatever aspects of human behavior we disapprove of. “He’s got a big ego,” we say of someone whom we consider self-centered or pompous. But who gets to decide what’s de­sirable and what isn’t?

Supposedly, the ego is a spiritual obstacle because it gives rise to nega­tive emotions. Yet negativity merely indicates that some part of us is try­ing to say no, which is often a perfectly appropriate and healthy response. Unfortunately, we often feel we don’t have the right to say no. For women, especially, this is a problem. Many women were taught to believe that to say no isn’t nice and is selfish.

One chilly winter day a woman called Sasha came to see me. Though only in her late thirties, she had a weary, wilted look. From her clothing to her hair, everything about her looked limp and tired.

The issue she wanted to discuss was her marriage. Ever since she’d married Jonathan, he’d been having affairs with women. The pain of it was killing her, and yet for almost a decade she’d been putting up with it.

The obvious question popped out of my mouth: “Why?”

Sasha told me she’d grown up in the seventies when free love was in and faithfulness out. Jealousy, she’d been taught, was a symptom of the possessive ego, a toxic weed that needed to be eradicated. Sasha’s hus­band happily reinforced this belief. She was supposed to be selfless and egoless—meaning she was supposed to accept his unfaithfulness without protest.

Recently, however, he had gone too far. They had taken a walk and were standing on a bridge looking down at the river, when suddenly he slipped off his wedding band, tossed it into the river, and triumphantly declared himself free from the petty concerns of the ego.

Something about the blatant hypocrisy of that act pierced Sasha’s wall of denial and forced her to confront the fact that something was very wrong with this picture. And yet, she told me, she still felt conflicted, even after all this. Had she not vowed to be with this man for the rest of her life? Had her spiritual teacher not told her she should always serve others and put their needs over her own? Who was she to deny her husband some­thing that gave him pleasure?

How many of us have betrayed our true needs and wants because we felt that to stand up for ourselves would be selfish? How many of us have swallowed our healthy anger because it was what a spiritually evolved person was supposed to do?

The consequences extend far beyond our personal lives. In my work with activists, I see how many of them fight fiercely for the causes they be­lieve in yet fail to offer themselves the same care and compassion they so generously offer the world. Having internalized the judgment of self-care as ego-centered self-indulgence, they often end up burning out.

To do so, we must acknowledge the wisdom of our ego. From fear to rage, every ego-based emotion has its own value and purpose. Each is a messenger that deserves to be heard, heeded, and honored.

I believe it’s high time we developed a new sense of respect and com­passion for our ego. It is not our enemy. It’s our friend. Granted, it’s a problematic, difficult friend, but a friend nonetheless who deserves to be honored as a sacred ally dedicated to the protection and preservation of life.

What Is the Ego, Anyway?

We’ve been talking about befriending the ego, but what the heck is it, anyway? Spiritual literature defines it as the part of us that perceives itself as a separate “I” and cares only about itself and the advancement of its own interests. It’s greedy and manipulative. It’s a glutton for praise and admiration. It’s competitive and as easily bruised as an overripe peach.

It sounds pretty unattractive, doesn’t it? No wonder we’re quick to jump on the “get-rid-of-your-ego” bandwagon. But is this really an ac­curate portrayal of the ego? I don’t think it is.

The ego, we’re told, is trapped in the illusion of its own separate­ness. This is true, but let’s not overlook a crucial point: The ego’s self-centeredness is sourced in nature’s goodness. Nature is in love with life and wants it to continue. She doesn’t want her creatures to fade into oblivion. Therefore, she has implanted in them a powerful sense of attachment to their individual existence that makes them willing to fight, tooth and claw, for their survival.

The ego is, in other words, nature’s most loyal and devoted servant. Nature has entrusted our ego with the sacred task of ensuring our sur­vival. If it clings to the illusion of separateness, it’s because that’s pre­cisely what nature wants and needs it to do. Without the ego’s devoted service, our species would have gone extinct long ago.

I believe we have many misconceptions that prevent us from seeing our ego as it really is. We’ve already spoken of one: the belief that the ego is an enemy of the heart. It’s true that, at present, our ego often refuses to honor the wisdom of the heart. Yet as we shall see, the problem is that our ego is currently relying on outdated information. In fact, the ego can function optimally only when it’s centered in the heart. The moment it loses touch with the heart it becomes foolish and shortsighted. Far from being enemies, the ego and the heart are natural allies.

A second common misconception stems from our exaggerated indi­vidualism. The ego, so the story goes, is exclusively interested in advanc­ing our personal interests. If something doesn’t pertain to the ego’s own sense of security and well-being, it couldn’t care less. But this isn’t ac­curate. Sure, as nature’s devoted servant, the ego wants to ensure our survival. But where we go wrong is in assuming this means the survival of the individual. In fact, both nature and her servant the ego are primarily committed to the survival of the species and only secondarily to that of the individual.

To ensure the survival of the species, the ego will do its best to protect whatever it considers the basic unit of our survival. In our world, that basic unit is the individual. From a young age, we are taught to view our­selves as separate entities responsible for our own successes and failures. We learn that we must compete and fight our way to the top and that the mark of success is the acquisition of wealth and power. Naturally, there­fore, our ego focuses on advancing our personal interests.

Of course, individuals wanted to survive. But above all, they wanted their tribe to survive, for without it they were doomed. A solitary individ­ual was worth nothing; everything hinged on the survival of the group. Therefore, the tribal ego was primarily invested in protecting and defend­ing the tribe.

In traditional tribes, individuals generally merged and identified with their tribes to an extent that is completely alien to us. From where we stand, it might seem they had no ego. Yet they most certainly did. However, their ego followed different guidelines than does ours. Be­cause it perceived the tribe as the basic unit of survival, it naturally pri­oritized tribal over individual needs. If the tribe were to die, so would the individual.

When people speak of the ego, they’re usually referring to what I call the modern ego, 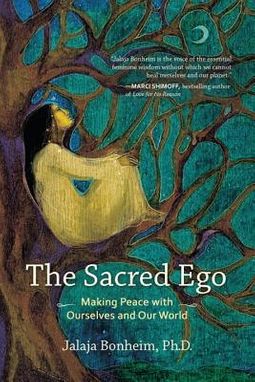 which started to emerge only about five thousand years ago. Now you may be thinking, “Five thousand years? That’s not exactly modern by my book.” But remember, we’re looking at an evolutionary process that unfolded over hundreds of thousands of years. Against that backdrop, five millennia is the mere blink of an eye. Today, both the tribal and the modern ego live within us, side by side. Sometimes they clash; sometimes they reinforce each other.

The modern ego is primarily concerned with advancing our personal interests. “Make sure people like you,” it tells us. “Try to look good. Make money. Don’t let anyone see your weaknesses.” Because this is the only manifestation of the ego we know, we assume it’s by nature obsessed with personal success, status, prestige, and personal power. Yet this is a mis­conception. In fact, it’s focused on whatever it believes will ensure our collective survival.

So far, I’ve spoken about two important misconceptions regarding the nature of the ego. The first is that it’s the heart’s enemy. The second is that it cares only about our personal well-being. A third common mis­conception I would mention is the belief that our ego possesses a host of negative qualities.

I would argue that these qualities pertain only to the modern ego, not to the ego per se. When people describe the ego as greedy, for example, what they are actually saying is that in the modern era our ego perceives greed as advantageous. However, in a different social environment, this may not be the case. The ego itself does not possess specific qualities. Rather, it urges us to cultivate whatever beliefs, habits, and behaviors it considers most conducive to our success as a species.

What The Ego Is and Isn’t